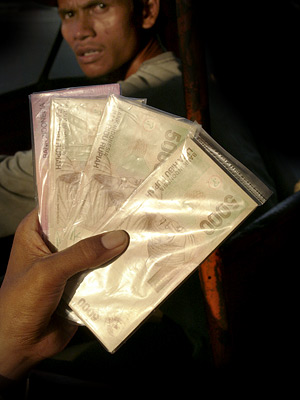 The Asian financial crisis of the late 1990s left the Indonesian banking system in utter disarray. At least 66 banks were closed, 12 were taken over and others forced to merge. A run on banks prompted Bank Indonesia (the central bank) to issue almost $13 billion in liquidity assistance to ailing banks. Much of this money was misused.

The central bank has suffered further scandals involving bribes paid to lawmakers and a controversial bailout. From 2002 to 2009, 11 senior officials of Bank Indonesia were convicted of corruption and jailed. In 2014, the Jakarta Corruption Court began a series of trials over the 2008 bailout of Bank Century.

Despite its many travails, the banking system has largely sorted itself out. Nevertheless, for the new resident, banking in Indonesia can still be a labyrinthine mystery. Prior to the 1997-99 financial crisis, Indonesia had 245 banks. As of February 2014, there were 139 banks operating in the country. These include: the central bank, 4 state-owned banks, 65 private banks, 26 regional banks, 17 joint venture banks, 10 foreign banks and 16 shariah/Islamic banks. At the end of this article is a list of banks that are operating in the archipelago.

What follows can only be considered observations and tips; not legal advice.

There are money changers at airports, major cities, large hotels and many shopping malls. Some may deal in only a few major currencies. Always check the official rate before visiting a money changer to be sure you are getting a fair deal. Sites such as Currency Converter provide live exchange rates, as does Bank Indonesia's Foreign Exchange Rates webpage.

Most local banks offer exchange rates that are as good as – and sometimes better – than those offered by money changers. But banks close early and may have long queues, whereas some money changers are open 24 hours, seven days a week. Banks often require at least a day's notice if you want to use rupiah purchase large quantities of foreign currency, especially uncommon currencies.

There are some chains of money changers, such as DolarIndo, but most are stand-alone operations. The worst exchange rates tend to be offered at airports and hotels. Beware of money changers operating on the streets, as they are the most likely to attempt to rip you off with counting or folding tricks.

If you want to change US dollars, they should be in brand new condition (no creases or marks), as older notes will be rejected or traded at a reduced rate. Better rates tend to be offered for $100 notes than lower denominations.

Some money changers are happy to haggle and will usually offer a better rate after you mention you want to change several hundred dollars or several million rupiah.

The rupiah has been around since 1946, although it did not receive international recognition until 1950. The currency code for the rupiah is IDR. The rupiah is subdivided into 100 sen (cents), although these have been obsolete since the 1960s because of rampant inflation.

In 2012, the government announced that it would redenominate the rupiah, beginning in 2014, by cutting three zeros off the currency and that all 'old' rupiah would be withdrawn from circulation by 2018. The plan, like so many others, has been indefinitely delayed.

Very roughly, the exchange rate is about Rp 10,000 to the US dollar, although the rupiah is prone to fluctuation depending on political and international factors. Note that Indonesia uses a comma as a decimal separator, and a period to separate thousands. For example, Rp 10,000 is written as Rp 10.000, while Rp 1.4 million is written as Rp1,4 million.

Counterfeit money was a big problem in Indonesia after the 1998 fall of Soeharto, with elements of the military behind some of the counterfeiting. Numerous notes were withdrawn from circulation and redesigned. For a few years, the first Rp 100,000 notes were made from polymer in Australia, but they were replaced at the end of 2004 and withdrawn from circulation in 2008 because ATMs had trouble counting them. High denomination banknotes are now printed on imported European paper. The national mint is called Perum Peruri.

Checks are an exceedingly rare species in Indonesia; where they are heard of, they are discouraged. It can take up to three months to get a foreign check cashed in an Indonesian bank, and that's assuming you have equivalent funds on deposit. Pretty much everything outside of commercial banking is done with cash, electronic transfers or credit cards.

If you are being paid locally, most companies prefer to transfer your money directly to your account. The other best option is to have it paid in cash.

For your day-to-day needs, you'll need to open a local bank account. Your best bet is probably BCA (Bank Central Asia), with Bank Mandiri coming in second. BCA, at least in Jakarta, seems to have the most ATMs, and more retail outlets use BCA debit cards. For some reason, the debit withdrawal system isn't integrated; you need to have a card for the specific bank the store uses.

There are about 50,000 ATMs located across Indonesia, mostly in shopping centers, outside bank branches, inside convenience stores and at some apartments. There is a growing trend toward banking online or via ATMs to avoid long queues inside banks and their limited operating hours.

ATMs are usually clearly labeled to indicate whether they dispense Rp 50,000 or Rp 100,000 bills. Some ATMs are labeled 'Non-Tunai' (Non-Cash), which means they are specifically for paying bills and other transfers. Bills for electricity, telephone services, water, cable television and internet can all be paid via ATM. Airline tickets and mobile telephone credit can also be paid for via ATM.

Most ATMS accept MasterCard, Visa, Maestro, Cirrus and Visa Plus. The Alto, Prima and Link interbank networks are also common. Dollar withdrawals can be made only from Citibank ATMs and some HSBC and Commonwealth Bank ATMs.

If using an Indonesian ATM to withdraw money from an account in your home country, beware that you could face high charges. Many British, American and Australian banks charge a foreign exchange fee and also take a percentage of the value of each transaction, so a $50 withdrawal could cost you $10. If you intend on using a bank account from your home country, check to see if they offer a particular debit card without extortionate fees for foreign withdrawals.

ATMs in Indonesia have varying maximum limits for withdrawals, usually from Rp 1 million to Rp 2.5 million. When you insert a non-Indonesian card into a local ATM, it will ask if you want instructions in Indonesian or English.

If your ATM card is worn or damaged, beware of it getting stuck inside an ATM. It is much safer to use an ATM located inside or at the front of a bank branch, rather than one at a shopping center. ATMs in malls are managed by third parties, so if your card gets stuck inside one, it could take up to a week to get it back.

Indonesian ATMs have been prone to scams. Cameras and skimmers recording PINs used to be a problem, but many ATMs now have small shields over the keypads. Some scammers tamper with card slots and put up fake 'Customer Care' stickers so they can receive calls from people whose cards get stuck and request their PINs.

One thing you'll soon discover is that, while obdurate behavior on the part of officials of all sorts, and particularly of bank employees, is justified by policy, or "rules", there really aren't any. Or at least anything consistent. One bank employee will tell you that you can't open an account unless you have an Indonesian ID card. Another at the same bank will demand a passport, some will tell you that you need Indonesian citizenship or a driver's licence, while others insist on a KITAS. The consensus seems to be that you need a KITAS; just bring everything you have and go from person to person until you find one who demands what you can provide.

And that is where you'll run into difficulty. There is no tradition of customer service in Indonesia, so petty officials, particularly in banks, see their primary function as creating impediments. They will make you line up (for hours, even) while they eat lunch and then sleep at their desks. When it is finally your turn, they will do everything of which their creative imaginations can conceive to turn down whatever request you are making. Keep smiling and thanking them. Even when they walk you through the completion of countless redundant forms requiring utterly irrelevant information, then they'll scrutinize the results and reject them because you filled them in with blue, rather than black, ink. Or the reverse.

Eventually, you may get through it and you will be permitted to give them your money. You will have to come back in a few weeks to get your ATM card, longer if you want it to generate English language instructions and dialogue on the ATM screens. That will entail more queuing and proof of identity. Then, if you intend to pay bills electronically, you'll need to travel to some other obscure branch to order the electronic "key." Then you'll need to come back to pick it up.

Once you're set up, though, it seems to run reasonably well, as long as you physically avoid the bank itself.

If you have money transferred to your local account from a foreign country, expect delays and red tape. Most long-term expats are convinced that the local banks use incoming transfers to speculate on currency fluctuations; assume that your funds will be exchanged at the lowest possible rate plus a significant surcharge.

The best advice is to keep it simple; don't do anything that could require following up in person, as you will find no one is accountable for anything. So use cash for everything you can, and an off-shore VISA or MasterCard for hotels and airline tickets (expect a surcharge of up to 3 percent), and the ATM for accessing daily cash. For any significant money, or for savings and investments, you're best to consider off-shore financial services from your home country or, perhaps, Singapore.


Opening a BCA Account
Go to your nearest BCA branch and bring your passport and KITAS/KITAP.
You may also be asked to provide a tax number (NPWP) and a letter from your employer.
The minimum initial deposit is Rp 500,000 for rupiah accounts, $100 for dollar accounts, and S$200 for Singapore dollar accounts.
The minimum balance for an account is Rp 10,000.
Benefits of BCA: Huge number of ATMs and branches. They never terminate inactive accounts. You can leave Indonesia for 10 years, come back and your BCA account will still be active, provided it has sufficient funds for the administration fees. Simple internet banking is offered via KlikBCA
Negatives of BCA: There is a monthly administration fee, which varies depending on the type of account you have.
BCA Monthly Account Fees
Tahapan Gold and Silver: Rp 13,000.
Tapres: Rp 13,000. If your balance falls below Rp 5 million, you will incur an additional Rp 10,000 monthly fee.
Tahapan Xpresi: Rp5,000.
Tahanan Platinum: Rp 20,000.
BCA Dollar: US$1/S$2.
BCA Syariah: Rp 7,500.

Opening a Mandiri Account
Go to your nearest Mandiri branch and bring your passport and KITAS/KITAP. An Indonesian driving license, if you have one, may also be accepted as ID.
The minimum initial deposit is Rp 500,000 for rupiah accounts and $100 for dollar accounts.
The minimum balance for an account is Rp 10,000.
Benefits of Mandiri: Being the country's biggest state-owned bank in terms of assets, it has the most branches.
Negatives of Mandiri: Often long queues inside branches. If you lose your ATM card, Bank Mandiri requires you to obtain a missing item report (Surat Keterangan Kehilangan) from police in order to issue a replacement. Obtaining this police document is time-consuming and should be free but you may have to pay for it.
Mandiri Monthly Account Fees
Tabungan A: Rp 2,000.
Tabungan Kartu Debit: Rp1,000.
Mandiri Dollar: $1($5/month penalty fee if balance below minimum level).
Giro Rupiah: Rp 20,000.
Giro Valas USD: $5.
Giro Valas EUR: EUR5.
Tabungan Haji: No monthly fee.