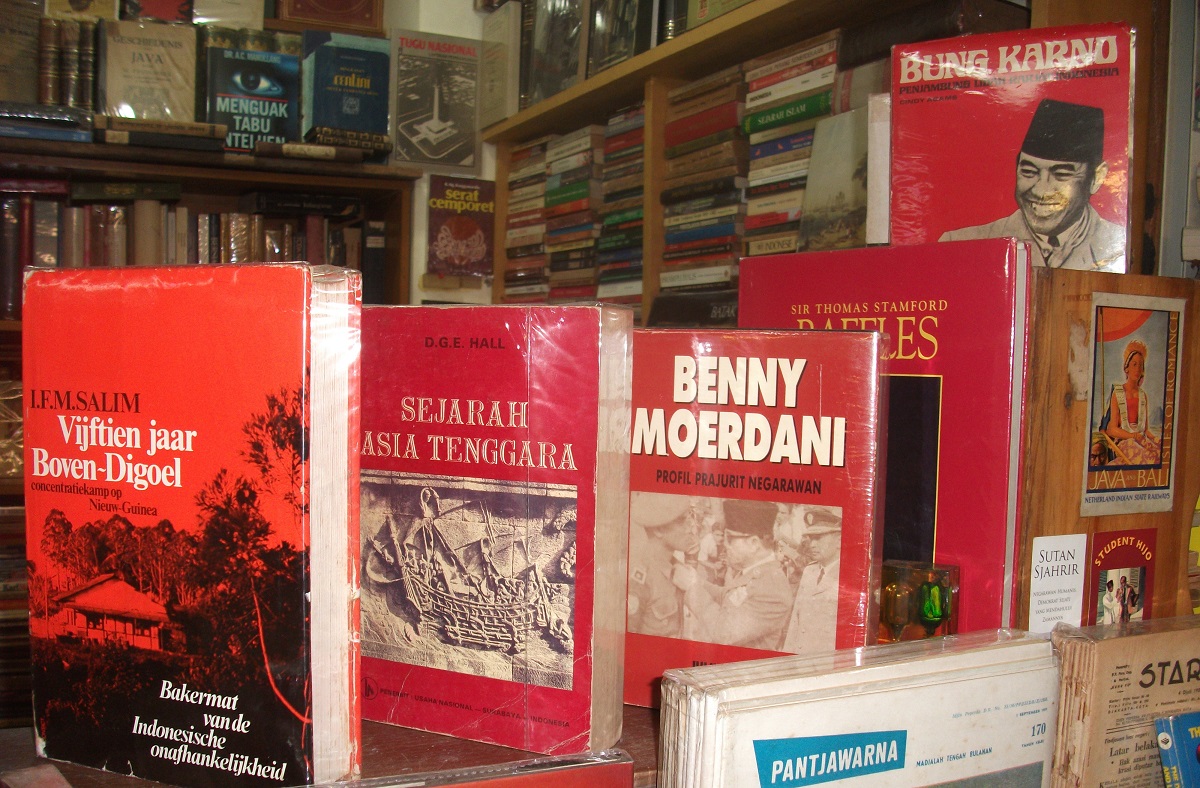 Book chains selling English titles in Indonesia are Kinokuniya, Periplus, Times and Aksara. They have shops in several big malls and a wide selection of subjects and titles. Prices are generally higher than abroad as their books are imported.

Indonesians have not taken to e-readers as the big publishers are yet to release many e-books, perhaps wary of the country's proclivity for piracy. If searching for an e-reader, they can be bought at one shop in Jakarta's Mangga Dua Mall for double what they sell for in the West. It makes better financial sense to bring one or two from home.

Jakarta has several second-hand bookstores, including the Reading Room, run by novelist Richard Oh in Kemang and Gudang Buku in Plaza Festival. There is also a massive second-hand book market located in the basement of Blok M Square, while the city's cheapest book market is located amid fetid labyrinths alongside Senen bus terminal. Taman Ismail Marzuki arts center in Cikini has a shop selling old political history books and some new copies of Indonesia-related novels.

In Bali, Ganesha Bookstore in Ubud has been operating since 1986 and offers a wide variety of Indonesia-related titles in English. It also has branches in Kerobokan and Sanur.

The Lontar Foundation, established in 1987 by American translator John McGlynn and four Indonesian writers, publishes Indonesian literature translated into English. Titles in Lontar's Modern Library of Indonesia series can be found in Periplus and Kinokuniya outlets or ordered from Lontar's website.

The biggest book publisher and retailer in Indonesia is Gramedia Pustaka Utama. Nearly all of its titles are Indonesian, including translations of English bestsellers. Larger Gramedia outlets, such as the one in Pondok Indah Mall 1, have a small selection of English books.

In addition to local publishing houses, you can order books online from Amazon and The Book Depository (which offers free shipping) for delivery to Indonesia. Note that Amazon may not deliver some items to Indonesia. Any purchases from abroad worth more than $50 may be subject to heavy import duty. Some buyers ask vendors to write on the package that the value is less than $50. If you're looking for out-of-print or hard-to-find titles, you may be able to find them on Abe Books, but note that not all third-party vendors may ship to Indonesia.

Those wishing to delve into academia will find a myriad of theses and articles published by universities and smaller publishing houses. You can read about the history, geography, ecology, culture and more of the archipelago from prehistoric times to the current reformasi era.

EDITORIAL NOTE: You may have noticed some differences in the titles and descriptions with regard to the spelling for Indonesian names. It is the Editorial Style of this Web site to use the admittedly outdated "oe" spellings for Soekarno and Soeharto. This decision was made by the Administrators and a consulting editor; reasoning that most Indonesian writers and publications still prefer the old spelling.