If you eat in Indonesia, you eat rice. 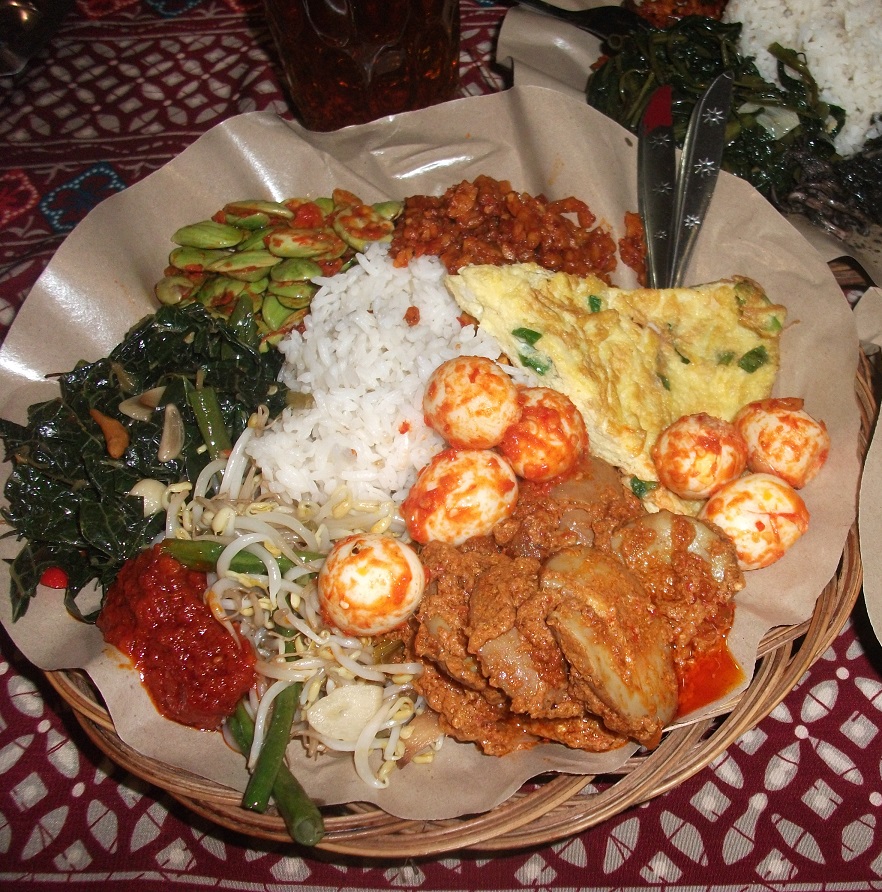 Rice is the central part of any meal. You can eat noodles or a variety of other starches like cassava or even potatoes, but it's not a real meal without rice. In fact, the phrase ‘makan nasi,' meaning to have a meal, translates literally to eat rice. A meal can be just about anything with rice. You'll see a lot of fried chicken and a lot of fish, as these make up the bulk of the animal protein that's commonly eaten on a day-to-day basis, at least on the main island of Java. A lot of vegetables are eaten, either fried or boiled and served in their broth; these can always be poured over the rice and eaten with a spoon.

Seafood in Indonesia is wonderful. Fish, both freshwater and from the sea, is plentiful and widely available, as is crab, shrimp, mussels, prawns, squid (cuttlefish), octopus and eel. These are cooked in a variety of ways and all are usually served with rice. Note that almost everything will have some bite to it, as chili peppers are used in almost all cooking and can be quite spicy for people from some parts of the world, but not nearly as spicy as Thai cuisine. As well as chili paste, chili sauce or just raw chili peppers will be served along with the meal; you can either just eat your food on medium spicy or you can try to raise blisters on your tongue. Some food and sauces can be extremely hot, so if you're not accustomed to it, take it in moderation at first-eventually you will build a tolerance and learn to love the heat.

Beef is widely available but relatively expensive. In grocery stores, don't look for any fancy cuts like you'd find in Western Europe, North America or Australia; steak here is usually either tenderloin, very good, medium tender and you tell them how to cut it, or sirloin - kind of tough and not as thick as Westerners are used to. Otherwise, you'll find a lot of organ meat. Beef heart is popular.

Indonesia is a predominantly Muslim country, so you won't find pork in many smaller stores in country towns (although most modern supermarkets in Jakarta and Bali will have a separate pork section catering to several thousand foreign residents and the 33 million non-Muslim Indonesians). You will also find a lot of goat and occasionally lamb. Chicken is everywhere. Whole, parts, organs, you name it, they've got it. In most big stores and the traditional markets you'll find things you're not used to: live frogs, chicken heads and feet, turtles and other exotic bits.

In Indonesia, some foods you might never have considered trying are available. Organ meat may not be common where you come from, but it is consumed on a routine basis in Indonesia: lung, brain or intestine. As well, animals you might not have thought of as protein sources are considered good eatin'. In Manado, a common menu item is bat (the wings are particularly tasty). Dog is eaten by some non-Muslims and mouse is considered quite a treat for some folks. You'll find barbecued whole rats on a skewer being offered in some traditional markets. You can also find snake. Cobra blood and gall is considered an aphrodisiac. 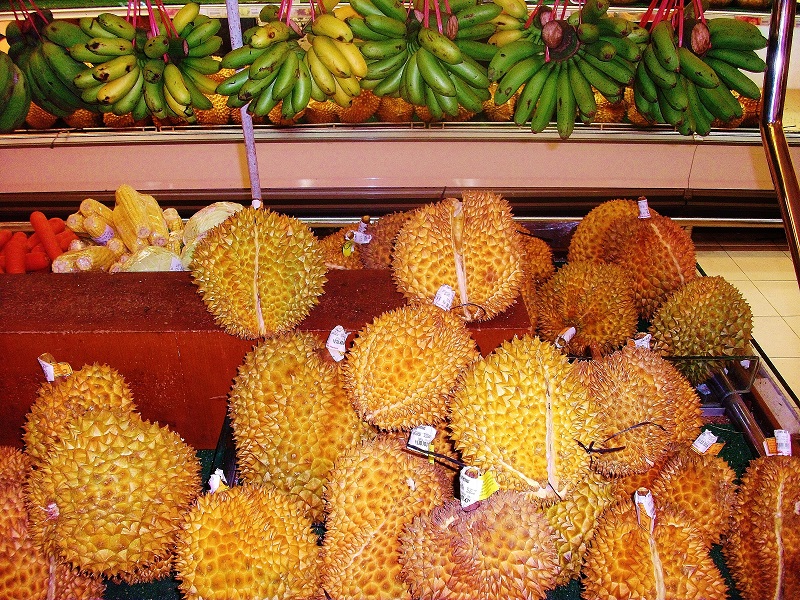 One thing you won't be able to miss is the astonishing variety of fruit that Indonesia has to offer. Besides the usual fruit like apples, watermelon and the tropical fruits like mango, banana, pineapple, guava and papaya, you'll be confronted by rambutan, duku, manggis, salak, the famous durian and all kinds of things you've never heard of. Experiment. Some are always in season (papaya, coconut, banana), others have particular times of the year (rambutan, mango, duku). Peaches, plums and cherries, on the other hand, are considered wildly exotic and few people have tried them.

Since alcohol consumption is forbidden by the Koran, drinking plays a very small part in the average working-class Indonesian's life. This is not to say that liquor is illegal or that no Indonesian imbibes. Just as it safe to assume that not every Catholic adheres strictly to the pontifical prohibition against birth control, every Muslim cannot be said to be a teetotaler. Alcohol simply doesn't make up a big part of the cultural interaction in the country. You will find beer and, in some cases, wine solid in supermarkets alongside soft drinks. Hard liquor is restricted to duty-free shops and sometimes Chinese-owned general stores in certain parts of each big city (e.g., Jalan Sabang in Central Jakarta). In fact, at the snack counter at some movie theatres you can get a beer to go along with your popcorn. It's just that Indonesians seem to take the view that it is a Western idiosyncrasy to pay such exorbitant amounts for a drink that isn't as tasty as a good fruit juice.

There are a few local potent potables, including ‘arak' and several really sweet grape concoctions as well as some kinds of cordials. Let's just say that they're an acquired taste. Foreign wine is enjoying a real upsurge in popularity among urbanites and Jakarta is now littered with wine bars and lounges, but choices are still somewhat limited and prices can be double what you'd pay in Europe or North America. Major hotels and nightclubs and bars all serve alcohol; it's generally relatively expensive, and many outlets will be closed during the fasting month of Ramadan.

Everywhere. There are restaurants, food stalls, food carts, food stands, food kiosks and wandering food vendors. Many people, including many long-stay foreigners, simply never eat at home. Most ‘warung makan' (open restaurants, primarily, but not exclusively for take-out) sell a fairly limited fare. There will be eggs (chicken and duck), vegetables, soups, fish, chicken, possibly some satay (skewered, barbecued meat morsels which could be beef, chicken, goat or pork and dipped in a spicy peanut sauce) and of course, rice. Point to what you want and take it home or eat at one of the stools at the counter.

In the mornings, temporary ‘bubur' shops can be found. ‘Bubur' is a delicious kind of rice porridge served with shredded chicken, chili sauce, shrimp crackers, fried soybeans and a variety of other condiments, depending on the chef. In some places, the ‘bubur' man will come around announcing his presence by tapping on a dish as he rides his restaurant-on-a-bicycle through the neighborhood.

Other specialist entrepreneurial chefs will ride through the neighborhood on a routine schedule selling everything from ‘bakso' (meat or fish balls) to ‘mie goreng' (fried noodles). From time to time, you'll see the fruit guy. From his cart, he'll sell you a mix of local seasonal fruit cut, peeled and served on a plate with a spicy peanut sauce. Just order from these guys and use one of their bowls/plates or give him one of your own. Eat, return his dish and pay. The price will usually be much less than one US dollar.

It might be a good idea to provide your own plate and utensils, though. Usually their concept of washing the tableware between uses involves little more than a perfunctory dip in some rather suspect water that they've been toting around all day in a bucket they have with them.

Of course, in Jakarta and other big cities, you can find the usual fast-food franchises: McDonald's, Pizza Hut, KFC, Burger King and Dunkin Donuts, as well as some Japanese and Indian franchise operations. Be forewarned, however. If you go to McDonald's for a taste of home, you'll find that it's not quite the same. It's hard to pin down what's different, but the beef is local, so the different breeds of cattle might be the explanation. Don't forget, at KFC, you'll get rice with many 'kombo' dishes, whereas chicken gravy does not exist. There are also some menu items geared to local tastes at all of these outlets.

You may also want to try JakartaRestaurantReviews.com for reviews on, em Jakarta Restaurants.