The Indonesian legal system is complex because it is a confluence of three distinct systems. Prior to the first appearance of Dutch traders and colonists in the late 16th century and early 17th century, indigenous kingdoms prevailed and applied a system of ‘adat’ (customary) law.

The Dutch presence and subsequent colonization during the next 350 years until the end of World War II left a legacy of Dutch colonial law. A number of such colonial legal instruments continue to be applied today. Subsequently, after Indonesia’s independence proclamation on August 17, 1945, the Indonesian authorities began creating a national legal system based on Indonesian precepts of law and justice.

The three strands - ‘adat’ law, Dutch colonial law and national law - coexist in modern Indonesia. For example, commercial law is grounded upon the Commercial Code/1847 (Kitab Undang-Undang Hukum Dagang, or Wetboek van Koophandel), a relic of the colonial period. However, commercial law is also supplemented by a large number of new laws enacted since independence. They include the Banking Law/1992 (amended in 1998), Company Law/1995, Capital Market Law/1995, Antimonopoly Law/1999 and the Oil & Natural Gas Law/2001. ‘Adat’ law is less conspicuous. However, some ‘adat’ principles such as “consensus through decision making” (‘musyawarah untuk mufakat’) appear in modern Indonesian legislation.

After his resignation in May 1998, the 1945 Constitution was amended four times - October 1999, August 2000, November 2001 and August 2002. Among other things, these amendments deal with far-reaching issues such as limitations on the powers and term of office of the President; decentralization of authority from the central government to provincial and regional governments; and the creation of additional Constitutional bodies such as the Regional Representatives Council (Dewan Perwakilan Daerah, DPD) and the Constitutional Court (Mahkamah Konstitusi). Proposals for future amendments, some of which deal with equally weighty matters, are currently being discussed.

The 1945 Constitution provides for a number of Constitutional bodies. Two of the most important are the People’s Consultative Assembly (Majelis Permusyawaratan Rakyat, MPR) and the House of Representatives (Dewan Perwakilan Rakyat, DPR). The DPR is a 560-seat body that consists of elected representatives. Its main function is to make legislation and hold the President and his ministers accountable. The DPR meets during sessions scheduled throughout the year.

The MPR for the 2009-2014 period has 692 members, comprising all the DPR members, plus the 132 DPD members (four from each of the 33 provinces). Constitutionally, the MPR is the supreme state body. Only the MPR has the power to amend the Constitution. It meets more infrequently, typically on an annual basis (Constitutionally, it must meet at least once every five years). It issues policy statements in the form of resolutions (‘ketetapan’) up until 2004 issued the broad outline of state policy (Garis Besar Haluan Negara, GBHN).

Once promulgated, legislation is published in the State Gazette of the Republic of Indonesia (Tambahan Lembaran Negara). Certain types of legislation such as Laws and Government Regulations are accompanied by an official explanatory memorandum called the Elucidation (Penjelasan). The Elucidation is published in the Supplement to the State Gazette and is generally authoritative for purposes of interpretation. In addition to the State Gazette, there is a sister publication called the State Report (Berita Negara), which contains government and public notices. 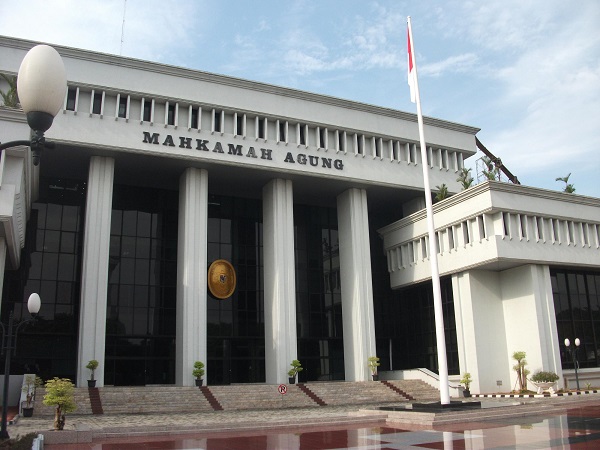 The Indonesian judicial system comprises several types of courts under the oversight of the Supreme Court (Mahkamah Agung). Following the civil law tradition of the Netherlands, Indonesian courts do not apply the principle of precedent that is so familiar among Common Law jurisdictions.

Most disputes appear before the courts of general jurisdiction, with the court of first instance being the State Court (Pengadilan Negeri). There are about 250 State Courts throughout Indonesia, each with its own territorial jurisdiction. Appeals from the State Court are heard before the High Court (Pengadilan Tinggi), of which there are around 20 throughout Indonesia. The High Court is a district court of appeal. Appeals from the High Court and, in some instances from the State Court, may be made to the Supreme Court located in Jakarta. The Supreme Court can hear a cassation appeal (‘kasasi’), which is a final appeal from lower courts. It can also conduct a case review (‘peninjauan kembali’) if, for example, new evidence is found that justifies a re-hearing.

From a geographical perspective, the nation is divided into provinces and the three special districts of Yogyakarta in central Java, Aceh in Sumatra, and the capital district of Jakarta. Each province is administered by a provincial government with its own representative assembly (Dewan Perwakilan Rakyat Daerah, DPRD). The provincial government is headed by a Governor, who is appointed by the President. As a result of the regional autonomy legislation enacted in 2000 and implemented gradually from 2001, greater autonomy and powers are being devolved to regional authorities. Overall, the administrative structure is as follows:

From an operational perspective, the country is administered chiefly through government ministries, which until 2008 had been called departments (and are still often referred to as such). The typical ministerial structure from an operational basis is as follows:

Apart from ministers who oversee individual departments, there are a number of senior ministers, called Coordinating Ministers (Menteri Koordinator), who each oversee a number of related portfolios. In addition, there are other officials holding ministerial rank, including the Attorney General (Jaksa Agung), the Secretary of State (Sekretaris Negara) and the Commander of the Indonesian Armed Forces (Panglima Tentara Nasional Indonesia).

There are at least three distinct types of legal professionals in Indonesia. They are the notaries, advocates and legal consultants. A notary (notaris) is a legally trained semi-public official appointed by the Department of Justice and Human Rights (Departemen Kehakiman dan Hak Asasi Manusia) to notarise deeds (‘akta’). The semi-public nature of a notary’s office arises because he is a government appointee who, at the same time, conducts a private professional notary practice.

Since a notary is a government appointee, he does not provide legal advice to parties appearing before him. The parties to a transaction should have obtained independent legal advice and agreed upon the matters contained in the deed prior to appearing before the notary. In this way, the notary acts as a neutral party who prepares, witnesses and authenticates documents, and subsequently archives the signed original in his office. At present, there are about 140 notaries throughout Jakarta. Parties are free to engage any notary they desire to authenticate their documents. Many notary fees are charged in accordance to a scale issued by the Department of Justice and Human Rights, although the fees for some matters are negotiable.

Advocates (‘pengacara’) are lawyers in private practice with formal legal training. They are the Indonesian equivalent of attorneys in the United States and barristers and solicitors in England. Many advocates focus on litigation although others also provide general legal advice. Due to the limited size of many of their practices, advocates in smaller firms may not have sufficient expertise to provide commercial law advice on international business transactions.

Legal consultants (‘konsultan hukum’) began to emerge as a distinct group of legal professionals in the late 1960s and early 1970s, when foreign investors started to venture into Indonesia in significant numbers. Most of them are also advocates although they tend to refrain from accepting litigation cases. Many legal consultants have completed advanced legal training overseas and prefer to specialize in providing legal advice and documentation for corporate, commercial, banking and cross-border matters.

Those undertaking Indonesian law research face the major hurdle of sourcing relevant legal material. Indonesian legal information is not widely available through print or online media, although recent improvements in the latter are making significant progress to the benefit of researchers. The main print media is the Government Gazette and its sister publications. The problem is that these publications are often behind schedule. The Government Printing Office (Pusat Penerbitan, PNRI) also publishes individual legislation on a case-by-case basis. Although these are useful and relatively inexpensive, they are not entirely error-free.

There are also legal books, journals and other publications. Most are in Indonesian and their standards of presentation and analysis vary. Many of these publications are available only in Indonesia or in specialist Indonesian collections in overseas libraries.

Online media has made some Indonesian legal material more readily available to the public. Certain Indonesian government departments provide on their websites key legislation in their respective fields of interest. The best free website currently available for law seems to be www.hukumonline.com, a USAID-funded project operated by a local non-profit group based in Jakarta. Operating since 2001, this site is updated regularly and contains much useful legal information.

One major limitation to Indonesian legal materials from most print and online sources is that they are presented in a non-consolidated form. For example, a statute like the Banking Law/1992 is available as it was first enacted in 1992. Its major revision, the Banking Amendment Law/1998, is available as a separate statute. Most publishers do not make the effort of consolidating the amendments, with the result that researchers have to undertake their own cut-and-paste effort to create a consolidated legislation. Another obvious limitation with many Indonesian print and online sources is that they publish their material almost entirely in Indonesian. This creates a major stumbling block for foreign researchers who are not familiar or fluent in the language.