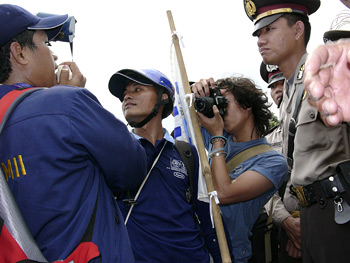 The Indonesian media presently enjoys considerable freedom after having been tightly muzzled during the 32-year regime of former president Soeharto. In the bad old days, publications that upset the government by telling the truth could have their licenses withdrawn. Several were shut down. Journalists faced intimidation and threats for reporting on politically sensitive issues, such as corruption and human rights abuses.

Soeharto's fall in 1998 ushered in an unprecedented era of press freedom. The number of newspapers, magazines, radio stations and TV stations flourished. There was also a boom in online media. Many of these ventures failed, while the successful ones were taken over by established corporate interests.

The local media remains vibrant, despite ownership being in the hands of about a dozen politically connected corporate groups. Press freedom has done nothing to stop political corruption. Journalists in outer provinces continue to face intimidation, while media bosses are generally reluctant to criticize the political elite.

While the global newspaper industry is in decline and facing extinction, the Indonesian print media remains robust. Ironically, most of the advertisements in newspapers are for digital telecommunications services and devices.

More Indonesians are starting to read the news on their smartphones or tablets, but advertisers are yet to abandon newspapers. At any busy intersection in major cities, there are likely to be vendors offering a range of newspapers to motorists stuck in traffic. In the face of rising digital media consumption, newspaper proprietors have developed multimedia platforms, awaiting the inevitable demise of print.

The Jakarta Post
Founded in 1983 as a collaboration between four media groups at the behest of information minister (and former military special operations chief) Ali Murtopo and politician Jusuf Wanandi. The Post assembled a talented team of staff and gained a reputation for credibility and pro-democracy. It survived the 1997 Asian financial crisis, whereas two older English-language newspapers, The Indonesian Observer and The Indonesia Times, went bust. Presently boasts a print run of 40,000 copies, which is probably an exaggeration. Coverage is generally impartial and independent but articles are not always insightful. Runs a good non-subscription website.

The Jakarta Globe
Started in 2008 by Lippo Group chief James Riady, after the owners of The Jakarta Post refused to sell him a stake. Millions of dollars were poured into what may have been one of the world's last big newspaper start-ups. The Globe began impressively but was hemorrhaging money and in 2011 started to slash staff numbers.

The Globe is occasionally ridiculed for its editorials and opinion pieces, which are seen as espousing the views of Riady, a born-again Christian, and the “positive journalism” mantra of his associates. In 2013 there were rumors the paper would cease to print. These proved unfounded but it did convert from a broadsheet to a tabloid format. Like the Post, the Globe has a good online version.

Pos Kota
Sleazy Jakarta-based tabloid focusing on petty crime and sex. The best city newspaper for classified advertisements. Founded in 1970 by former information minister Harmoko, who was known for taking a stake in newspapers in return for issuing them publishing permits.

The Bali Times
Founded in 2005. Purchased in 2006 by German-born Canadian real estate developer Hanno Soth. Content and editing could do with improvement.

Intellectuals will derive little pleasure from Indonesian TV. To gain maximum advertising revenue, the local networks produce shows that appeal to the masses, rather than educate them. Most of the networks have political affiliations, direct or indirect, so their news and current affairs shows are often biased in favor of certain political parties and fail to tell the full story. Interviewers tend to ask politicians polite rather than hard questions. Investigative TV journalism is not strong. The occasional exception is Metro TV.

Mostly, there are high-volume advertisements, pushing everything from cigarettes to consumer goods to political parties. Just about every network has a 6pm maghrib (Islamic evening prayer) clip, which is broadcast for a few minutes to remind the faithful to pray. These clips are not played in predominantly non-Muslim regions, such as Bali and North Sulawesi.

Many expatriates do not bother with Indonesian TV unless there's some major breaking news, such as a terrorist bombing or a natural disaster. Some Indonesians like having the TV on all the time at high volume, especially in waiting rooms.

Indonesian TV uses the PAL-B transmission standard, so TV sets and DVD players must be compatible with this standard.

TVRI
State-run broadcaster. Founded in 1962 so that it could broadcast the 1962 Asian Games that Jakarta was hosting. TVRI screened a diverse range of programs under founding president Soekarno. After Soeharto took power, TVRI became more an instrument of boring propaganda, although it did show some imported, dubbed series. The network lost its monopoly at the end of the 1980s. These days it's hard to find anyone who watches TVRI, apart from in a few remote regions, where it remains the only option for those without cable or satellite TV.

SCTV
Founded in 1990 by Peter Gontha and began broadcasting in the East Java capital of Surabaya. By 1993, it had obtained a national license. Underwent a series of ownership changes after the 1997 regional financial crisis. Now owned by media conglomerate Emtek, which is headed by Eddy Kusnadi Sariaatmadja and Sutanto Hartono. Eddy is said to be close to both the Democrat Party (of President Susilo Bambang Yudhoyono) and the family of former president Megawati Soekarnoputri (leader of the Indonesian Democratic Party of Struggle – PDIP).

MNCTV
Started in 1991 as TPI (Televisi Pendidikan Indonesia – Indonesian Education Television) by Soeharto's oldest daughter Siti Hardiyanti 'Tutut' Rukmana. Initially featured educational programming but ended up screening the same rubbish as other networks. Was taken over by MNC in 2005 but Tutut later challenged the takeover. The Supreme Court in 2013 ruled that majority ownership should revert to Tutut's company.

ANTV
Founded in 1993 by tycoon Aburizal Bakrie. It was set up to broadcast in Lampung province in southern Sumatra but immediately gained a national license. Notable for bringing MTV to Indonesia. ANTV is still owned by Bakrie's VIVA group, although it is planning on selling a 15% stake in the network. Bakrie is chairman of Golkar Party and its presidential candidate.

Indosiar
Launched in 1995 by the Salim Group, which was well connected to the Soeharto clan. In 2013, Indosiar was acquired by Emtek, the group that owns SCTV.

Metro TV
Indonesia's first dedicated news channel. Founded in 2000 by media magnate turned politician Surya Paloh. Notable for groundbreaking political satire show, Republik Mimpi. Features news bulletins in Indonesian, Mandarin and English. In 2006, Metro was joined by former CNN anchor Dalton Tanonaka, who was seeking a fresh start after a failed political career in Hawaii resulted in him being jailed for campaign financing irregularities. He left Metro in 2013 to start a new channel. Metro's programming has been steadily dumbed down over recent years in an effort to improve ratings. News coverage favors Paloh's NasDem Party. Since late 2013, Metro has been giving more coverage to the powerful PDIP, apparently in the hope of being invited to join a ruling coalition if PDIP wins the 2014 elections.

tvOne
Originally Lativi, which was founded in 2008 by former manpower minister Abdul Latief, perhaps best known for a corruption scandal involving state-owned insurance firm Jamsostek and his relationship with actress Desy Ratnasari. In 2008, it was taken over Bakrie's VIVA group and rebranded as tvOne. It now focuses on news, sports and political talk shows, often favoring Golkar and Bakrie.

Trans TV
Founded in 2001 and owned by Chairul Tanjung, who has no formal political alliances but is close to the Democrat Party. Used to have a popular late-night show called Fenomena, which examined sleaze.

Trans7
Founded in 2001 as TV7 by the Kompas Gramedia publishing group and the Bakrie family. In 2006 it was taken over by Chairul Tanjung's Trans Media group and renamed Trans7.

Global TV
Founded in 2002 and owned by MNC. Light entertainment, celebrity gossip and some news.

OChannel
A Jakarta channel that launched in 2006. Owned by Emtek. Broadcasts home-shopping shows.

KompasTV
Launched in 2011 and owned by Kompas Gramedia. Content is focused on news and light entertainment.

BChannel
Launched in 2009. Focuses on “family entertainment” such as cartoons and Korean soap operas.

Satellite TV in Indonesia was launched by Indovision in 1994. The technology used has since changed from analogue to digital. Satellite TV is available nationwide. There are about 10 providers to choose from, with new firms appearing as others go bankrupt. Many people prefer to get a package that includes internet access. Some services will hit you for monthly decoder box rental fees, although these are only about Rp 40,000. Following is a list of satellite pay TV operators:

Cable TV in Indonesia was launched by PT Broadband Multimedia in 1994 as Kabelvision. After switching from analogue to digital technology, the company in 2007 rebranded Kabelvision as First Media. Cable TV is available only in Jakarta and its satellite cities, as well as the West Java capital of Bandung and the East Java capital of Surabaya.

First Media: Offers a full package of channels for Rp 369,000/month and cheaper 'selection packs'. Requires a decoder box, which is rented at Rp 40,000/month.

Indonesian radio will mostly likely be your companion when stuck in traffic and lacking any music to play. Inane adverts and DJs may be annoying but listening to local radio is a good way to improve your Indonesian. There are some English language broadcasts on local stations from BBC and Voice of America.

The advent of internet radio streaming means you can listen to your favorite stations from abroad while in Indonesia. You can also use smartphone and Bluetooth wireless technology to stream internet radio stations to your car radio.

Indonesia has about 3,000 radio stations but few of them broadcast nationally. Most use FM (frequency modulation) technology, which is more suited to local broadcasting because it requires many transmission stations to cover wide areas. The number of radio stations using AM (amplitude modulation) has declined following the issuance of the 2003 Ministerial Decree on the Indonesian Master Plan for FM Frequency Allocation. There are also several digital radio stations in Jakarta and Surabaya.

Radio is regulated by the government through the Communication and Information Ministry's Directorate General of Radio, Television and Film.

The state radio broadcaster is Radio Republik Indonesia, which provides a national news service and has regional stations in most provinces. Its overseas division is called Voice of Indonesia.

Detikcom
Indonesia's most popular news website, great for breaking news. Usually ranked in the country's top 10 websites and among the top 320 sites in the world. Began life as a political tabloid called DeTik, which was banned by the Soeharto regime in 1994, along with Tempo magazine and Editor tabloid. After the fall of Soeharto, DeTik journalist Budiono Darsono in 1998 founded detikcom with former Tempo journalist Abdul Rahman. The site quickly built a reputation for quality journalism. In 2011, detikcom was bought by media mogul Chairul Tanjung for about $70 million. Subsequently, there have been complaints of a decline in the quality of its investigative reports, especially into political and economic issues.

Antara
Indonesia's state news agency. Started in 1937 as a private agency by independence activists unhappy with the Dutch colonial government's Aneta news agency. Taken over by the government in the 1960s. Now a state-owned enterprise. Daily news updates in Indonesian and English. Usually impartial but low on details, analysis and insight. Often tells only one side the story.

Tempo
Daily news updates in Indonesian and English. Generally more insightful and interesting than other Indonesian news sites. Tempo went online in 1995, after its magazine was banned by the government the previous year. Tempo Magazine, resurrected in 1998, has a full online edition in English, which requires a subscription for complete access.

VIVAnews
News, sport and lifestyle content. Founded in 2008 by the Bakrie Group, which in 2013 sold a 51% stake to raise funds for the group's coal businesses. English version has not been updated since 2012.