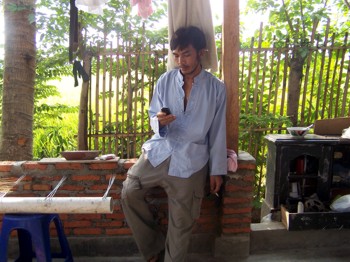 Indonesia has a fairly strong telecommunications structure for mobile phone services. In major cities at least, it is rare not to be able to get a signal, though mobile phones will likely be useless in remote rural and jungle areas. The government in 2012 boasted that 94% of Indonesians were covered by mobile networks. Mobile phones are commonly referred to as “hand phones”, which is abbreviated to HP (pronounced hah-pay).

When buying a SIM card, vendors may offer you a 'nomor cantik' (literally a 'beautiful number'), which has an easy-to-memorize pattern of similar numbers.

The Rise & Stall of BlackBerry

Many Indonesians use mobile phones primarily to send text messages, commonly referred to as SMS (for Short Message Service), as this is cheaper than making calls. For about five years from 2007, BlackBerry brand mobile devices were wildly popular in Indonesia, with consumers attracted to the BBM messaging service. BlackBerry subsequently lost its dominance to smartphones running Google's Android operating system. Cross-platform messaging application WhatsApp supplanted BBM as the most popular instant messaging tool. BlackBerry is trying to regain its dominance by introducing Android-based devices.

Two mobile phone network types operate nationally: GSM (Global System for Mobile Communications) and CDMA (Code Division Multiple Access). Each offers its own advantages, like cheaper SMS rates on several CDMA providers, or faster data access on GSM-powered phones. This means that ownership of two mobile phones, or a dual-network-enabled phone becomes de rigueur in Indonesia and is not so much a sign of affluence as it is a means of ‘working’ the system. Clever users will operate whichever mobile phone provides them with the smallest charge per service. Esia, a CDMA-based coverage provider, attracted many new customers after announcing that it would charge by the character per SMS. Talkative Indonesians can compress conversations into succinct text messages (A: mal?; B: ok). Esia, on the other hand, lost some fans for its intrusive unsolicited advertising calls and text messages.

There are predictions that CDMA telecommunications firms will soon become history because they are losing their competitive edge against GSM providers. The major CDMA players – Flexi, Smartfren and Esia – have all been suffering financial troubles.

Connection signal strength varies between different providers, based largely on proximity to cellular towers. Repeater antennas and signal boosters may be installed in some apartments and office blocks to provide stronger coverage. Some people will have two phones, each for a different GSM-based SIM card, such as Telkomsel's Simpati and Indosat's IM3, because service varies according to location. For example, Simpati's connection is weak in areas of northwest Jakarta, whereas IM3's signal is much stronger. Conversely, there are locations where Simpati is much stronger than Indosat.

Reception quality also varies from phone to phone. This is especially marked when outside major metropolitan areas. CDMA phones aren’t as strong in coverage as their GSM cousins, but this is reflected in their cheaper cost. With some CDMA phones, the handset is heavily discounted and you are given a fantastic amount of free text messages as an incentive to buy into a package.

The only times that Indonesia’s populace really impinges upon service quality are during Idul Fitri (the holiday marking the end of Ramadan) – when nearly everybody is phoning and SMSing each other to ask for forgiveness for a year’s worth of transgressions – and as the clock strikes 12 on New Year’s Eve. At these times, the system usually backs up for a few hours under the weight of goodwill being sent. Of course, as with every other network-based communication tool, the phone network will experience glitches, but this is true of developed countries as much as Indonesia.

A salient matter for many foreign residents of Indonesia is the cost of phoning one’s home country. International call rates vary from provider to provider, but there are other means of getting in touch with home, such as Skype, land lines (either from one’s residence or at a local ‘wartel’ [calling shop]), pre-paid international calling cards (offering rates of 2.5 cents to 5 cents per minute) and email. When buying a new mobile phone or SIM card, it is worth checking with the service provider beforehand about the costs, and if there are any peak or non-peak periods for overseas calls.

Monthly subscription plans (known as 'pascabayar' or postpaid) are available, but most users exploit the prepayment scheme ('prabayar') known as buying ‘pulsa’ (credit). Pulsa is sold on the street and in shops in two forms: vouchers and 'elektrik' (electronic). If buying a voucher card, which has a silver covering over a recharge code (usually 16 digits), check first on the back of the card that it has not expired.

Although it is frustrating when credit runs out, pulsa vendors are omnipresent at all hours, and apply only a small extra charge (usually about Rp 1,000 to Rp 2,000). Pulsa can also be purchased via ATMs, e-banking and at many 24-hour convenience stores without any mark-up. Vendors sell pulsa in amounts from Rp 5,000 to Rp 100,000.

Indonesia has nearly as many mobile phones as it does people. As of September 2013, there were 236.8 million active mobile phones and about 237.6 million people. The number of mobile phone subscriptions was at 285 million and rising.

One of the main reasons there are more mobile phone subscriptions than people is because SIM cards are so cheap. As of April 2014, a SIM card could be purchased in Jakarta for only Rp 2,000 (17 cents). There are also pre-paid “starter packs” with big credit bonuses available for only Rp 5,000.

Many people buy a pre-paid SIM card with no fixed monthly contract and then buy another card when a better deal comes along. As a result of this, Indonesia has one of the highest “churn” rates in the world – that is, inactive numbers – about 20%.

Scammers and spammers take advantage of the cheap SIM cards and promotional SMS rates to offer goods, services, loans, real estate and all manner of rubbish. SMS spamming software allows people to send out text messages – such as 5,000 texts in 30 seconds. Rather irresponsibly, telecommunications firms such as Telkomsel sometimes offer promotional rates, allowing spammers to send 5,000 texts for a few hundred rupiah.

Some telecommunications firms also send a lot of their own spam, being paid by companies to promote events and products. Scammers send text messages along the lines of “mama minta pulsa, tolong beliin pulsa 50ribu ke nomer baru mama 0858xxxxxxxx” (mama wants phone credit, please buy Rp 50,000 credit and transfer to mama's new number ….). Any such messages should be ignored and deleted.

Occasionally, you will receive an SMS from a government department, perhaps news of a flood warning or an advisory to travel safely over a holiday period. You may also receive spam text messages from companies such as Burger King if you are within their vicinity.

The Indonesian Telecommunications Regulatory Authority (Badan Regulasi Telekomunikasi Indonesia) in 2013 proposed raising the minimum cost of a SIM card to Rp 100,000 to discourage consumers from buying and throwing away numbers. BRTI has estimated that 50 million SIM cards are thrown away each month. Telecommunications companies oppose the proposal, arguing that it would curb expansion and hurt the poor.