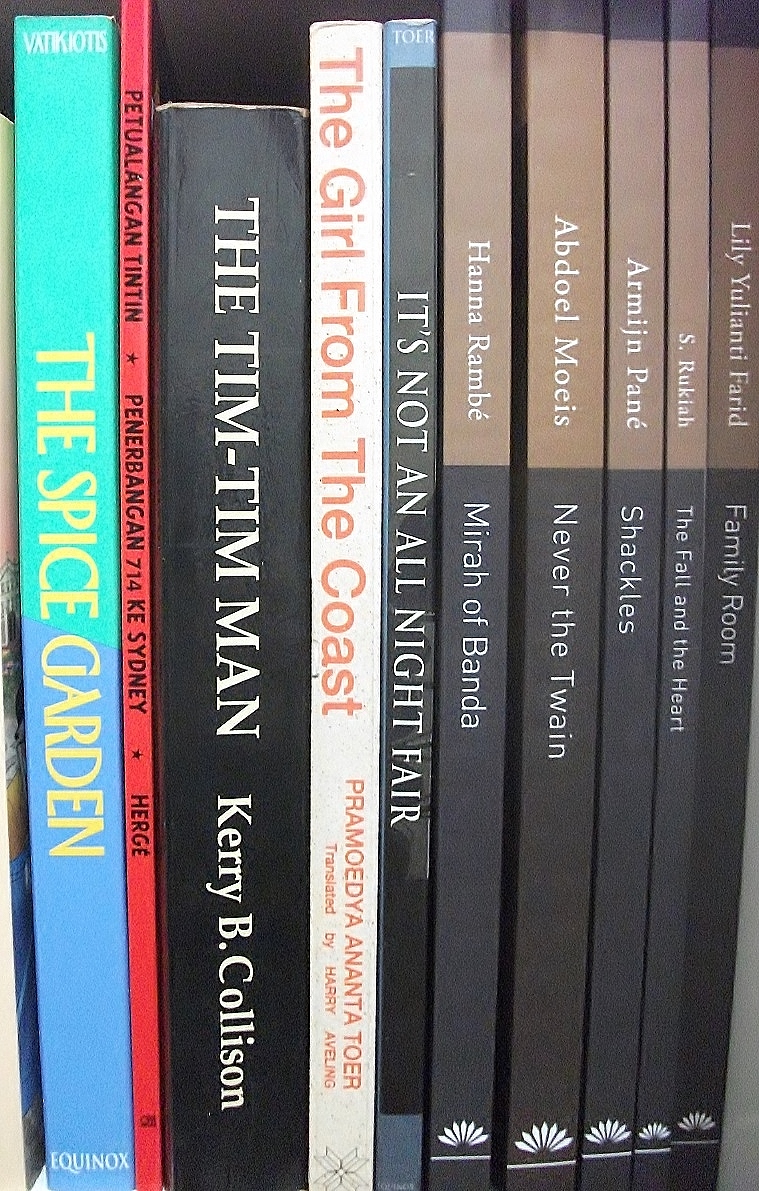 A Question of Red
Laksmi Pamuntjak (Gramedia), English translation 2014
The turbulent events of 1965-68 and their impact on people's lives decades later.

Jazz, Perfume and the Incident
Seno Gumira Ajidarma (Lontar) 2013
A Jakarta journalist writes a novel to elude the censors as he reports on the 1991 Dili massacre in East Timor.

The Dancer
Ahmad Tohari (Lontar) 2012
Trilogy of novels set during the turmoil of the 1960s.

The Land of Five Towers
Ahmad Fuadi (Gramedia) 2011
First in a trilogy about life in a Javanese pesantren (Islamic boarding school).

A Bali Conspiracy Most Foul
Shamini Flint (Piatkus Books) 2009
Inspector Singh of the Singapore Police is sent to Bali to assist with an investigation into a nightclub bombing but is soon probing the shooting murder of a British expat.

Kuta Bubbles
Alan Brayne (Llumina Press) 2009
Old gay expats in Bali and the rentboys they seek. And murder and alcoholism.

My Hands Came Away Red
Lisa McKay (Moody Publishers) 2007
An 18-year-old Australian girl joins a Christian missions trip to Maluku, just in time to get caught up in the 1999 sectarian violence.

The Spice Garden
Michael Vatikiotis (Equinox) 2004
Based on true accounts of the sectarian violence that erupted in the Maluku islands after the 1998 fall of Soeharto.

Rainboys
Frank Worsdale (Talisman) 2000
Political thriller involving expats caught up in the turmoil of Indonesia's 1998 transition to democracy. Not highbrow literature but a good yarn.

The Asian Trilogy
Kerry Collison (Sid Harta Publishers) 1996-98
Comprises: The Timor Man (originally The Tim-Tim Man), Freedom Square (originally Merdeka Square) and Jakarta. An interpreter at the Australian Embassy in Jakarta in the 1960s, Collison later went into business in Indonesia. In the late 1990s he began writing political thrillers based partly on real events.

The Weaverbirds
Y.B. Mangunwijaya (Lontar) 1991
A priest in Yogyakarta must decide which side to take during the transition from colonial rule to independence.

The Buru Quartet
Pramoedya Ananta Toer (Penguin) 1983-88
The quartet of novels comprises: This Earth of Mankind, Child of All Nations, Footsteps, and House of Glass. Indonesia's greatest literary work. Pramoedya was jailed by the Soeharto regime, which also banned his books.

Twilight in Djakarta
Mochtar Lubis (OUP) 1983
Life in the kampongs.

A Gentle Occupation
Dirk Bogarde (Triad Granada) 1980
The war in the Dutch East Indies in 1945 after the Japanese left; semi-autobiographical.

Monkeys in the Dark
Blanche D'Alpuget (Aurora) 1980
Life in Jakarta among foreign residents in the interregnum during Soekarno's exile after the 1965 coup.

The Year of Living Dangerously
C. J. Koch (Grafton) 1978
Journalists waiting for the revolution in 1965, which saw the downfall of President Soekarno.

The Ten Thousand Things
Maria Dermout (Simon and Schuster) 1955, English translation 1958
A classic of the beauty, superstition and violence of the Spice Islands of Maluku.

A Tale From Bali, also published as Love and Death in Bali
Vicki Baum (Geoffrey Bles) 1937
A peasant and his family are caught up in the Dutch massacre of Bali's last independent kingdom in 1906.

The Hidden Force
Louis Couperus (L.J. Veen) 1900
Explores the cultural gap between the repressive Dutch colonists and the mystical Javanese.

Lord Jim
Joseph Conrad (Blackwood) 1900
A young British seaman becomes leader of a group of Malays and Bugis in the fictional country of Patusam, likely Berau in what is now Indonesian Borneo (Kalimantan). Available as a free ebook.

An Outcast of the Islands
Joseph Conrad (T. Fisher Unwin) 1896
A Dutchman escapes poverty in his home country, only to find trouble in the Dutch East Indies.

Almayer's Folly
Joseph Conrad (T. Fisher Unwin) 1895
The life of a Dutch trader looking for gold in Borneo, and his relationship to his native wife and their daughter.

Aboe Bakar
P.A. Daum (Loman en Funke) 1893, Republished (Thomas & Eras) 1980
A youth of Javanese-Arabic descent is schooled in Holland but upon returning to the Indies he is treated as a second-class citizen, converts to Islam and becomes a radical.

Ups and Downs of Life in the Indies
P.A. Daum, 1892
Dutch colonial life in the 19th century.