Home » Practicalities » Getting Around » Private Transport

This is not really advisable in Indonesia, not least because you won't be familiar with the local Highway Code. 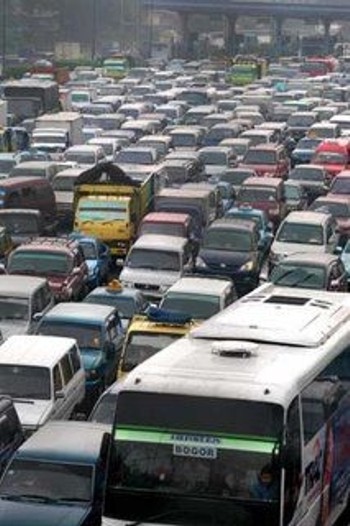 There isn't one, at least not in a form you might recognize. However, there is a code of sorts, a simplistic one, which basically says that if you hit someone or something then you are in the wrong. If you are a soldier or policeman, or your vehicle is the bigger or vastly more expensive one, then the other person pays.

And sidewalks if you're a motorcyclist.

Having your own transport, preferably with a hired driver, is the safest option and having access to a company car is the next best thing, especially one with CD (Diplomatic) plates which may entitle you to a police escort. To hire a driver, either talk to someone you'd trust with your life or use a lot of taxis until you find a driver you feel comfortable with. Many regularly offer their services to their passengers.

If you do think that driving yourself is perfectly reasonable, then keep your eyes open at all times. One-way signs, white divider lines, no-entry signs and other road markings are often meaningless to drivers in Indonesia. And police. Indonesia is one of few places in the world where you can be stopped for driving carefully.

Never assume you have the right of way; there is always someone, somewhere taking a ‘short cut’ the wrong way down a one-way street. Keep your eyes peeled, too, for the many makeshift ‘roundabouts’ intended to slow traffic at crossroads. Basically unlit oil drums, they make a horrible sound upon collision.

Be wary also of polisi tidur (speed humps, lit: ‘sleeping police’), there solely to wreck a car’s suspension. They are only occasionally painted to show their presence, the assumption being that you’ve already traveled along this section of road. Also, if you see what appears to be a bush growing in the middle of the street, give it a wide berth as that is one pothole you won't drive over. Most are unmarked so those are rarely avoided.

It’s said that driving unleashes the devil in everyone, and Indonesians are no exception. Some drivers honk their horns constantly, especially when approaching corners or driving within touching distance of your rear bumper, but this noise pollution is, thankfully, a lot less than in other countries. Use of the horn means only, “I am hurtling towards you, watch out because I might run you down.”

When drivers flash their headlights, they want you to give way. This is particularly alarming in the case of vehicles which are moving rapidly towards you. Yield.

However, one of the few things that will slow traffic down is the color yellow. It symbolizes death and is a sure sign that a funeral procession is imminent. The traffic slows for a hearse, but not an ambulance.

WNA can and do own vehicles. No comments about STNK, BPKB, Insurance, SIM Process?

thanks erni, clearly incorrect info there. will fix it soon.

Are we sure aboout ownership? Most expats, who have yet to gain citizenship, have spouses, or other trusted local partners, in whose names all property is vested.

(Not that I recall mentioning ownership in my original writing of this piece.)

there no lawful prohibition for foreign residents to own vehicles or other property, with the sole exception of real estate.