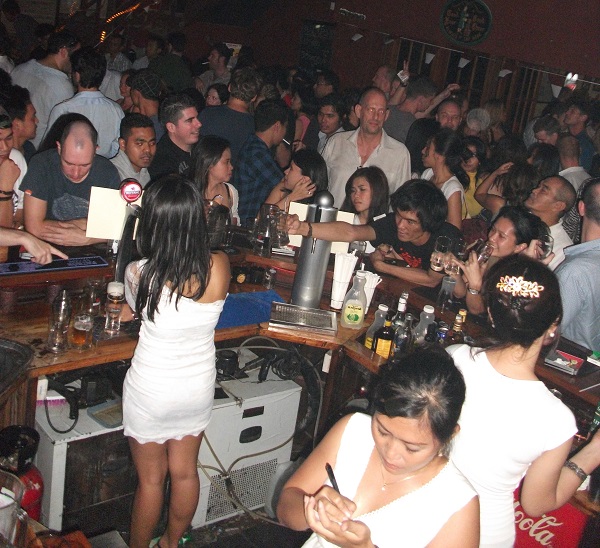 If pubs and bars are your idea of an evening's entertainment, an afternoon's business venue or simply a casual social center, Indonesia can be a little hit or miss depending on your location. Jakarta has a thriving pub scene due to its multicultural milieu, while in less metropolitan areas you will notice a sharp decrease in terms of choice. Since Indonesia is predominantly Muslim (exceptions being Bali [Hindu] and Manado, North Sulawesi [Christian]), in some places there is simply no demand for bars, as 'warung' (street stalls) and mosques are the focuses for social interaction.

As a general rule of thumb, if a place caters to foreigners or tourists, then alcohol is usually served, with restrictions only enforced during the Islamic holy month of Ramadan. Even then, most watering holes in major cities only make minor alterations to their d‘cor or serving policies to appease these restrictions.

Bars usually have multiple functions to accommodate the diverse needs of their clientele. In Jakarta, it is common to find large groups of young people in bars drinking soft drinks and using the place as a hangout. It is rare to find dedicated alcohol-only bars. Most bars are part restaurant, part social center, part Wi-Fi hotspot and sometimes part nightclub as the wee hours crawl in.

In Jakarta, the pub scene can be divided into seven broad categories:

Indonesians famously love to make and listen to music and Jakarta is no exception, with rock, blues, jazz, R & B, emo (ask a teenager), hardcore (ditto) and 'dangdut' (an Arabic/Indian/Malay-inspired style1 with a distinctly Indonesian flavor) all among the options for an evening's deafness - Indonesians like LOUD music. However, karaoke is also considered to be a perfectly acceptable form of live music here and proliferates across the archipelago casting wannabe rock and ballad gods and goddesses into your auditory path at quite an alarming rate.

Sports bars are very popular in Indonesia, given the local fixation with European and international soccer and F1, but only a few venues broadcast American sports as a matter of course. With soccer (sepak bola) being the obsession of choice, almost every bar has a multitude of TVs to facilitate the addiction, rendering almost every bar a sports bar, or at least a soccer bar. However, due to annual mysteries involving the issue of broadcast rights to television companies, relying on your favorite bar to show the games you want is a bit of a lottery.

For newcomers to Jakarta, the travel guides usually refer you to Jalan Jaksa - the city's "backpacker strip." This is a euphemism for a slightly seedy, but cheap and cheerful street of bars and cafés in Central Jakarta. It is a backpacker district only because the travel guides say so and is, in truth, trading on past glories. It is gradually being brought into the 21st century, and some of the refurbished pubs and billiard bars have a more modern vibe to them, but its main charm lies in the fact that the locals have had decades of experience dealing with be-sandaled travelers getting drunk on Bintang (the most popular local beer) and making fools of themselves.

There is a popular misconception that Jakarta is a den of sexual vice and iniquity, with areas such as Blok M's Jalan Falatehan and nightclubs near Kota at its magnets for sin. While it is true that every city offers some level of debauchery, Jakarta's red-light scene is largely overhyped and relatively covert.

Places to be seen

Check-me-out venues proliferate in Jakarta as much as in any other major city. These places for the hip, young, lithe types have transient popularity in keeping with the fickle nature of youth and so, usually revamp, respawn and rebrand every six months or so, chasing the endorsement of Jakarta's movers and shakers.

Hotel bars are generally a good barometer of the class of a hotel overall, with service and ambience ranging from downright seedy to relaxed and homey.

These bars have largely been monopolized in Jakarta by one famous group of pubs and the emphasis is on having bars where conversation is encouraged between strangers and a convivial atmosphere is had by all.

You will find many pubs and bars that don't fit into these categories, with the social scene constantly shifting and adapting. This is what makes Jakarta, and the rest of Indonesia, such an exciting animal to track. Enjoy exploring.

I would never have guessed that a hotel bar would be a reasonable indicator as to the class of a hotel, would you save that the obverse is true too?

Its generally a good place to ascertain the wealth of the clientele.