Java's social and cultural landscape: politically, culturally and geographically, Java sits at the center of the Indonesian nation. Without Java, there could not be an Indonesia. The Javanese ethnic group occupies the majority of the island of Java. Other major ethno-linguistic groups in Java include Sundanese (West Java), Betawi (from the area around Jakarta) and Madurese. Although Java represents only 7 percent of Indonesia's total landmass, ethnic Javanese comprise about 45 percent of Indonesia's total population. Javanese attitudes and worldviews tota 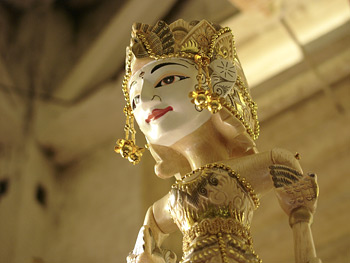 lly permeate the Indonesian bureaucracy, government and military, hence the great importance of understanding the Javanese perspective when referring to Indonesia.

The great majority of Javanese could be said to be very sympathetic to mystical dimensions of human existence. The typical Javanese worldview is based on the essential unity of all existence, in which life itself is a kind of 'religious' experience existing in harmony with a universal order. This worldview emphasizes inner tranquility, harmony and stability as well as acceptance, the subordination of the individual to society and the subordination of society to the universe. Interpersonal relations are carefully regulated by customs and etiquette to preserve this ordered state.

These, of course, are the high ideals of Javanese culture that may not always be realized in actual life, as contemporary events in Java frequently demonstrate. In every culture, there is often a distance between ideal behavior and reality. Nevertheless, the concept of harmony in the Javanese community is a core concept, notwithstanding outbursts of uncontrolled emotion that may occasionally be displayed.

A trio of social polarities

Javanese society and culture is by no means singular or homogenous; it is a complex amalgam of differing tendencies and apparently opposing worldviews. This must be kept in mind when attempting to generalize about Javanese culture; it is not unitary, but rather comprises a composite of influences - modern and traditional, religious and secular/nationalist. Javanese society has long been analyzed in terms of three major social polarities or worldviews; the abangan (the commoners), the priyayi (the nobility) and the santri (the Islamists, more appropriately referred to as muslimin). These somewhat arbitrary categories should not be interpreted to mean classes or castes, but rather as outlooks; ways of looking at and making sense of the world.

It is very common in Java to find people of all these outlooks living together under the same roof and, of course, there are very many shades of gray; for example a muslimah may well sometimes adopt haughty priyayi attitudes when socializing with her neighbors, may well believe that manusia harimau (tiger people) inhabit her village, but at the same time be completely devout in her Islamic practice and belief. Although the 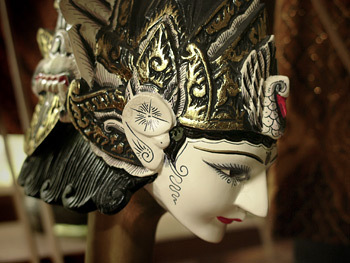 abangan-priyayi-santri schema is much criticized by academics, mainly because of its tendency to stereotype groups and individuals, its general relevance remains to this day.

Nominally, at least 95 percent of Javanese acknowledge Islam as their religion. However, caution is required when considering this fact, as Islam in Java is expressed in a many diverse ways, and depth of commitment to the religion is highly variable. Javanese who refer to themselves as muslimin (muslimah, if female) more closely identify with Islam and its aesthetics, in the case of women especially, adhering more closely to Islamic dress codes. The muslimin probably comprise about 25-30 percent of the Javanese population, and are themselves divided into traditionalist and modernist schisms.

Other Javanese are rather ambivalent about their official religion. Although they will most certainly refer to themselves as Muslims, they will rarely perform religious duties associated with Islam and do not structure their lives in accordance with its precepts. This worldview, referred to as abangan, sees itself as the bearer of indigenous Javanese culture. The archetypal abangan is rather conservative, resistant to change, and tends towards fatalism and acceptance of misfortune and their place in society. Their outlook is often colored by the indigenous mystical animism of Java.

The last important polarity in Javanese society is the priyayi, who, in the past, comprised the class of officials, military officers and intellectuals. They are now strongly associated with Indonesia's bureaucracy and ruling elite. While in the past priyayi were the descendants of nobility, these days priyayi can refer to anyone with an academic education or to anyone who simply reflects this particular outlook. Like the abangan, the priyayi are nominally Muslim, however their worldview is highly influenced by the culture of the royal courts of Java, such as Yogyakarta and Surakarta (also referred to as Solo), which are highly influenced by the aesthetics and religious ideals of the Hindu era in Java.

Javanese society is strongly patrician and hierarchical, with what appear to be great power distances between each level within a social structure. Showing proper respect, in speech and behavior, is an important aspect of Javanese culture. Javanese society is highly inclusive and there is a place for everyone from the highest to the lowest. Hierarchy ensures that every person in society knows both their place and their obligations within the social structure. Those in high positions should be shown respect; those in lower positions should be treated with goodwill and their welfare guarded.

For foreigners, particularly those from Western cultures, adjusting to these notions of hierarchy can sometimes be difficult. The average Westerner in Java may often attempt to "flatten" the appearance of power distance between people of differing classes or levels in any particular business or social situation by treating every person as more or less equal. Unfortunately, such attempts to introduce Western-style egalitarianism into Javanese business or social contexts rarely produce the expected result. More often this will produce confusion and discomfort for all concerned. As an example, a Western manager in a workplace situation should avoid "pitching in" with lower-ranking workers, obviously unless this is absolutely necessary for demonstration purposes. Becoming "one of the boys" is simply not understood, either by workers or by other Indonesian managers, who keep their place and maintain a proper distance. Respect and credibility may well be lost.

Javanese culture is characterized by collectivist values and by systems of patronage. Collectivism and patronage together stress vertical axes of human relationships, in contrast to individualism and egalitarianism characteristic of the West, which stress horizontal axes. Patronage networks form the basis of many Javanese social, political and economic relationships. For example, a person in an Indonesian company, government department or the military may often owe their high status, well-paid position to a certain person, to whom they will remain indebted, and to whom they must always defer. Power distances between levels in these networks can appear great, and flexibility of movement within the network is restricted by obligations and responsibilities. It would be very uncommon indeed for a person lower in the network to overtake their patron in terms of rank or income.

Age is an important determinant of social status in Java. The younger person defers to the older person, in language and in attitude, even when the age difference is negligible. A person - especially a man - is not considered to have reached maturity until the age of 40, and persons of lesser age can sometimes be left out of decision-making processes upon this basis. Other determinants of social status include marital status, gender and education. Thus, a 40-year-old married man with a university education would assume a high social status in nearly all situations. Often, the wife of such a man assumes the same relative status within the social domain, thus a wife of a man of lesser status would usually defer to the wife of the man of higher status. It often happens that Western companies send their best and brightest person - who happens to be young - to negotiate or work with an Indonesian company. The managers at that Indonesian company will almost immediately feel a little insulted that somebody more "authoritative" was not sent to deal with them. Of course, nothing is ever said directly to this effect; besides being impolite, most Javanese would take these matters to be self-evident in any case.

Patience, for Javanese, is a high virtue and a lot of this virtue is certainly required in Indonesia, especially when engaging with corporate or government bureaucracies. A sense of urgency is generally absent in the average workplace. Being late or not turning up at all at an appointed time is very common. By contrast, time is an important issue for the average Western businessperson.

No cuttin' thru the BS

The Western tendency to want to "cut through all the bullshit and get to the point" usually ends up doing more harm than good when the businesspeople are Javanese. Relationships must be cultivated in order for trust to be established, and this cannot be rushed. And, of course, different relationships move at different paces, depending on the individuals involved. Some relationships move quickly, others can be excruciatingly slow. (Some relationships may well be slow to develop because one party may not be all that interested!) It is important that the relationship is not forced, as frequently seems to happen with Western businesspeople on tight schedules and planes to catch. In addition, Westerners often overestimate the depth of their relationships with Indonesian business associates and, perhaps, become overly familiar too quickly because they misread the naturally friendly and polite manner of the average Javanese.

Communicative indirection and formality are other issues that can cause discomfort or difficulty for Westerners in Indonesia.