Home » Practicalities » Getting Around » Trains 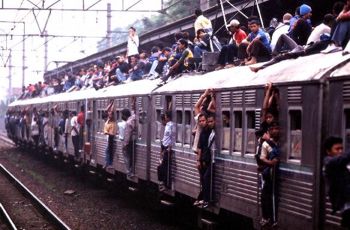 There is something deeply romantic about trains, especially those which carry you through exotic countryside; unfortunately, the Orient Express isn't routed through Indonesia.

The Dutch colonial administration built an extensive railroad system connecting major cities on Java as a means of conveying their personnel and goods around at a reasonable speed. However, the Japanese (1942-1945) were the first to manage the railroads as one entity. Following independence in August 1945, the first Indonesian state railroad company was formed, but it was not until 1954 that the railroads were nationalized.

P.T. Kereta Api Indonesia (KAI) is the successor state operator of public railroads in Indonesia and pays track access fees to the government. The Indonesian government has recently created the Directorate General of Railroads, directly answerable to the Minister of Transportation. This was done in a bid to improve the railroad's position vis-à-vis other transport modes. In other words, there may yet be bus stops outside train stations and not 500 meters down the road.

The legislature has passed an amendment to the current law to allow a greater role for private companies and regional governments in providing railroad services, a reversion to pre-1954 operations. However, it is unclear whether the proposed rebuilding of the Aceh railroad, with assistance from the French railroad company SCNF, is to be a joint venture.

The current trackage is 5,042 km, although that includes the disused Aceh system, the mostly disused West Sumatra system and other disused tracks. This total does include a number of lines that are now double-tracked, thus offering greater capacity.

The railroad system in Java is more or less passenger-oriented, with few freight services, due to the limited capacity of the tracks. In the provinces of West Sumatra, North Sumatra and South Sumatra, the reverse is true with lines serving cement works, coal mines, power stations and plantations. However, a passenger service is currently being revived northward from Padang in West Sumatra.

Other projects being mooted include the linking of existing railroad lines in Sumatra from Aceh to Lampung via both west and east coasts of the island. Railroad lines are also planned for the currently railroad-less islands of Indonesian Borneo (Kalimantan) and Sulawesi. These plans are a revival of a project initiated in the 1920s but killed off by the Great Depression.

It is hoped that the current crash of financial institutions will not have a similar effect.

Jakarta train travelers have enjoyed better services following the 2008 launch of PT KAI Commuter Jabodetabek (KCJ), which operates electric commuter trains throughout Greater Jakarta, an area that extends to the satellite towns of Bogor, Depok, Tangerang and Bekasi. A number of new air-conditioned trains now serve the Bogor and Bekasi lines, which previously were restricted to "cattle class."

A greater emphasis is being given to ensuring that all passengers have a ticket - which can cost as little as Rp 1,000 for 3rd Class with no air-conditioning (or doors). This has had the effect of reducing the number of passengers so it is now increasingly rare to hear of roof riders taking a tumble or being electrocuted.

KCJ in 2013 introduced e-tickets, which are durable plastic cards that commuters tap 'in' and 'out' at station turnstiles. The cards cost a deposit of Rp 5,000 (refundable) plus the fare, and can be re-used for one week.

It is possible, even advisable, to reserve seats on ‘eksekutif' and ‘bisnis' trains. Wikipedia's page on Indonesian rail transport is extremely informative, with a map showing where the comfortable trains go in Java. They generally have air-conditioning and a meal-trolley service. From Jakarta, most depart from Gambir Station although a few go from the station at Pasar Senen. If you do take a train from Jakarta (Gambir) to Bandung (Argo Gede) or Yogya (Argo Lawu), make sure to reserve a seat on the right facing forward so you get the best views of the ravines and peaks that you will pass.

The architecturally magnificent Stasiun Kota is used primarily for commuter trains, as is Pasar Senen. With the third-class commutes you have to take your chances and be prepared for great stoic discomfort.

KAI has a page of timetables and ticket prices. These are, of course, subject to the usual variables such as derailments, the theft of rails and signaling equipment, pedestrians and vehicles ignoring flashing lights at road junctions, jam karet (Indonesia's rubber time), the time of the year (the Idul Fitri holiday sees every train overbooked months ahead) and the availability of a webmaster able to update the site.

There is also an online ticketing service, although we know of no one who has yet tried it. You need to state the name of the train, the date and time of departure, the number of passengers, the class and number of seats, the ticket price, the administration fee, the total amount payable, make a note of the booking code - which is important as you have to give this when you go to the ticket office (loket) at the station - and pay at least three hours before departure. Oh, and download a 2.5-megabyte booking form (it's a big .pdf document). It is far better to pay your local travel agent to make the arrangements.

Railroad history buffs will find useful links on this wikipedia page and this page has a list of redundant steam engines which, if they haven't been sold for scrap, can be seen on plinths around the country.